Skip to content
50
SHARES
ShareTweet
Virus flareups among migrant workers are fueling a second wave of infections in Southeast Asia, forcing governments to shift direction to contain resurgent outbreaks, and serving as a warning to other countries looking to ease restrictions as cases ease.
Singapore and Thailand have been caught out by infections among foreign workers, who come from other parts of the region to work on building sites, in low-wage industries and as domestic labor. The countries are now scaling up testing of these communities, with the cramped dormitory-style or temporary accommodation they’re often housed in leaving them vulnerable to infection from the highly contagious coronavirus.
An explosion in cases among Singapore’s 1-million strong migrant worker population has seen it become Asia’s most-infected nation after China and India, and raised questions over its earlier, less restrictive approach to the virus. Thailand also saw a recent spike, with new cases climbing to a two-week high on Saturday following a cluster among migrant workers being held in the country’s south. The infection rate has been been broadly declining after peaking in late March.
The region’s second wave is a lesson for other countries, said Peter Collignon, an infectious diseases physician and professor of clinical medicine at the Australian National University Medical School.
“People take their eye off the main game,” said Collignon, who also advises the Australian government on infection control. “This is transmitted by hands and droplets, so that’s what you’ve got to address everywhere.”
Physical distancing is a big part of prevention, so people living in “second rate conditions” are at risk, he said. “This virus doesn’t discriminate.”
Read more: How Singapore Flipped From Virus Hero to Cautionary Tale
More Testing
While Singapore appeared to contain its initial outbreak via a strategy that leaned heavily on contact tracing within the general population, the virus spread in the dormitories that are home to more than 200,000 of the city-state’s foreign workers. Now registering hundreds of new infections each day, it’s triggered a pivot in Singapore’s strategy. After keeping schools and restaurants open for much of February and March, the government imposed a partial lockdown that was extended last week until June 1. It’s also had to ramp up testing for the virus, with cases jumping to more than 14,000, from just over 3,000 two weeks ago.
In Thailand, 42 infections were reported Saturday among undocumented foreign workers mainly from neighboring Myanmar being held in a detention center in the country’s south. The cluster made up the bulk of that day’s jump in new cases.
The outbreak was discovered after the government stepped up testing among higher risk groups, an idea Prime Minister Prayuth Chan-Ocha borrowed from Singapore, Taweesilp Witsanuyotin, a spokesman for Thailand’s Covid-19 Center said on April 25. As of April 24, the nation had conducted 178,083 tests and ramped up daily testing capacity to about 20,000, focused on those with symptoms or who had been in contact with infected people.
“What we found is in line with our plan to be more active,” Taweesilp said. “We need to look into new segment to find active cases like migrant workers.”
Covid-19 in Southeast Asia
Singapore has the highest number of recorded infections in the region
Source: Johns Hopkins University compilation: WHO, CDC, ECDC, NHC, DXY, 1point3acres, Worldometers.info, BNO, the COVID Tracking Project (testing and hospitalizations), state and national government health departments, and local media reports.
Note: Data as of April 27
Thailand was the first nation outside of China to register a coronavirus case, back in mid-January, and its tally currently stands at almost 3,000 infections. Globally, coronavirus cases reached 3 million, while deaths have passed 211,000.
Outbreaks have also occurred elsewhere among migrant workers, a group that risk being overlooked by policy makers because of the transient nature of their work and their role in society.
In Gulf states, workers from India, Nepal and Bangladesh make up much of the city’s blue-collar labor force. Last month, Qatar put some migrant worker camps on the outskirts of the capital under lockdown for two weeks in an attempt to contain the spread of the coronavirus among low-income expatriates.
“The areas at risk are those that have migrant workers living in close quarters such as is happening in Asia,” said David Heymann, an infectious disease specialist at the London School of Hygiene and Tropical Medicine. “It happens in South Africa, it happens in the Middle East, so wherever you go I think you can find these situations, and what’s important is they be dealt with properly and they respect the rights of those who are sick.”
Overlooked Groups
These workers, who often undertake jobs that regular citizens shun, have the potential to fall through the cracks of governments’ virus strategies.
Migrant laborers, prisoners and refugees are among marginalized groups around the world who tend to live in the sorts of spaces that make them vulnerable to disease, said Abdi Mahamud, a virus incident manager for the World Health Organization in the Western Pacific region. “Targeted strategies for marginalized populations and high-risk settings must be part of national and sub-national contingency, preparedness, response and recovery plans.”
Some countries are already moving to get ahead of the issue. While it hasn’t detected outbreaks among its foreign worker population of the scale of Singapore, Malaysia is adopting a targeted approach to testing them, Director-General of Health Noor Hisham Abdullah said on Sunday.
The nation, which neighbors Singapore to the north, is accelerating testing in areas that are subject to stricter lockdown rules in an effort to “contain any positive cases to limit any further spread of infection,” he said during a briefing. 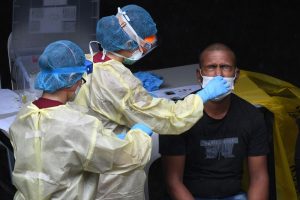